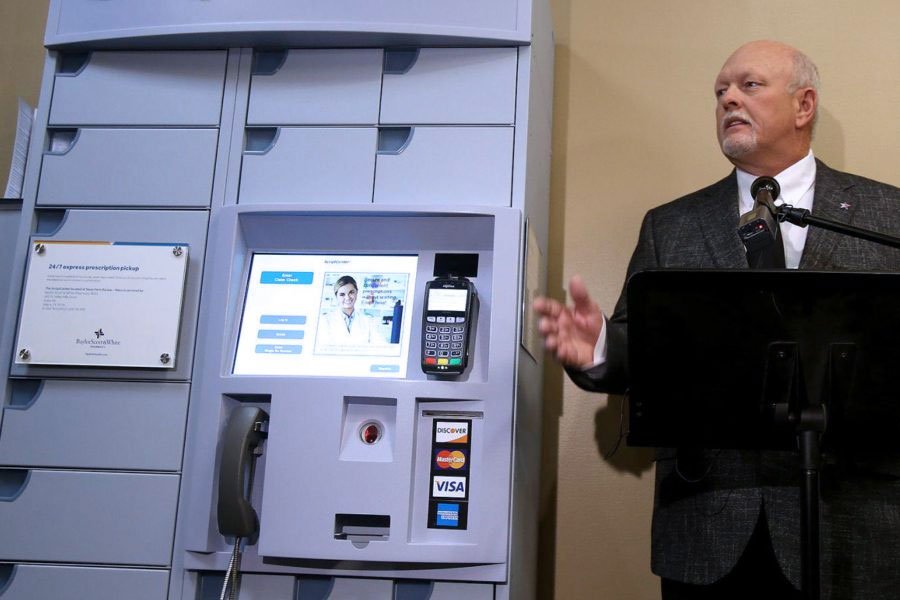 Employees at the Texas Farm Bureau corporate headquarters in Waco now can fill their prescriptions at work, adding to amenities that include a walking track, wellness center, workout room and access to an on-site doctor.

They also may enroll in programs to win prizes for losing weight.

During a media event Thursday, the advocate for Texas farmers and ranchers that also sells insurance unveiled a new Baylor Scott & White Pharmacy kiosk. It reportedly is the first such remote kiosk of its kind in Texas, though Scott & White will roll out more in the coming months, a news release states.

“As we continue to increase access to quality care throughout the state, it is important that we make it easier for patients to follow their treatment plan,” said John McWhorter, Baylor Scott & White Health chief operating officer, in a statement. “These convenient pickup kiosks are offered in addition to the pharmacy delivery service we are piloting in some of our markets.”

Carrollton and Round Rock are the markets where kiosks not assigned to a specific business have been tested, said Tammy Cohen, vice president of pharmacy at Baylor Scott & White Health, in an email message.

The nearly 500 people employed at the Texas Farm Bureau complex off Fish Pond Road now may fill 30- and 90-day prescriptions by punching in identification codes. The drugs drop into one of several dispensing chutes, arriving in white sacks reminiscent of those at pharmacy drive-thru windows. Employees can pick up their prescriptions at their convenience.

During the Thursday walk-through, lights beeped on the kiosk when the prescription was ready for retrieval. A live pharmacist appeared on a screen to offer assistance when the appropriate function was activated.

A slot for credit cards would process co-pays. Cash was not accepted.

Cohen, in an interview, said Baylor Scott & White Pharmacy in 2017 began testing an automated prescription pickup system, with the approval of the Texas State Board of Pharmacy. The board later approved new rules that took effect in June 2018, allowing Texas pharmacies to deliver medications outside of retail pharmacy locations via a kiosk, according to a news release.

A fact sheet provided by Baylor Scott & White Health said all prescriptions can be filled at kiosks; prescriptions are available at the kiosk within hours of when they are called in and can be picked up 24 hours a day; pharmacist consultations are available by phone or video at all times; and the kiosks are able to preserve medications in a climate-controlled environment.

Cohen said though Texas Farm Bureau is the first business to receive a remote kiosk, consumers in the Dallas/Fort Worth, Temple and Austin areas will see kiosks installed at Baylor Scott & White Health locations.

During an interview, Farm Bureau executive director Cook said use of the prescription kiosk is optional for employees. He said the bureau agreed to install the kiosk due to a longstanding relationship with the health system.

“We had no idea the technology existed, and did not see a down side,” said Cook. “We’re always willing to listen to innovative ideas.”

He said he’s certain other companies will inquire about the success of the program and its acceptance among employees.

Penny Anderson, human resources director for the Farm Bureau, said her office will answer questions employees may have about the service. She said staffers with difficulty navigating the machine should have little trouble finding help, either at the kiosk itself or in human resources or the wellness center.

Employees no doubt will let management know of chronic problems.

“They will not suffer in silence, I guarantee you,” said Cook.

The kiosk at the Farm Bureau is a ScriptCenter product. The ScriptCenter website says the technology allows pharmacy staff to control filling and checking prescriptions, while the kiosk takes care of payments and pickups. It says the service is becoming popular with health systems and at military bases, college campuses and retail centers.

It says ScriptCenter provides an array of privacy and security systems, including fingerprint scanning, cameras and signature-capture devices.